MidCamp 2018 has come and gone. This was the regional Drupal camp's fifth year, and my fourth time attending (missed year one ?). The amazing group of organizers behind the conference makes it one of my favorites. MidCamp is a human first event -- everything is about accessibility. The amount of information available online about the venue or travel is above and beyond what I have encountered at other sprints. They even created a venue walkthrough using Google Photo's story feature.

For me MidCamp is also the springboard to DrupalCon. It's a way to get prepped and ready for "the big one" right around the corner.

My focus for MidCamp was to sprint on Drupal Commerce and its documentation. I hit more achievement on the former than the latter. I spent Thursday during the unofficial sprints to get a sprint board prepared and some issues triaged. It felt good to have some time away from client work and focus on the low hanging fruit in our queue, instead of smashing big bugs. 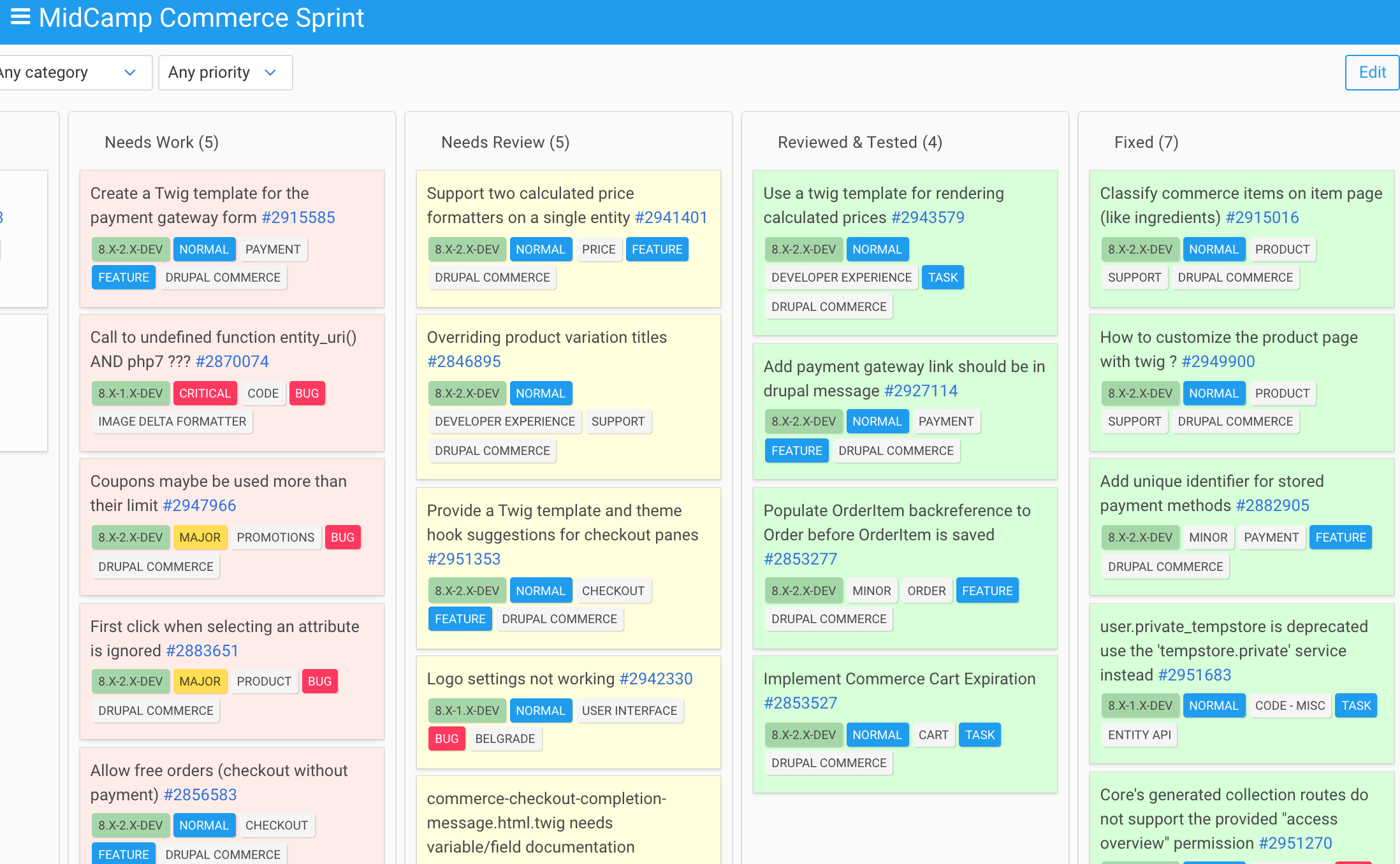 I also was able to formally meet our newest employee at Commerce Guys! Lisa Streeter joined us about a month ago straight out of a Drupal Easy class. MidCamp was her first official Drupal event. She actually just wrote her own blog post about MidCamp and her Drupal story. I highly recommend giving it a read: http://www.streeterdev.com/2018/03/14/midcamp-2018/

My good friend, and Drupal Padawan, Justin joined me for the Friday and Saturday sessions (thanks for letting him loose on Friday, Acro Media!) We arrived a little late thanks to rush hour Chicago traffic, but made it right in time for the keynote. Chris Rooney talked about diversity and inclusion in Drupal and What's So Open About Open Source?. It was insightful and personal, I enjoyed hearing from Chris about his experiences. One of my favorite takeaways was our safety nets. Many of us are privileged to have safety nets to catch us when life is thrown a curveball. Not everyone is so lucky. As someone who has this comfort, I have always felt obligated to take more risks and give back (hence why I work in open source, to hopefully help those who have less of one, in some way.)

We met up with Carlos, one of Justin's coworkers at Acro Media, and Mauricio Dinarte. It was his first time in Chicago. So, of course, we took him out to get a proper hot dog. Devil Dawgs did not disappoint. Will do again. 10/10. 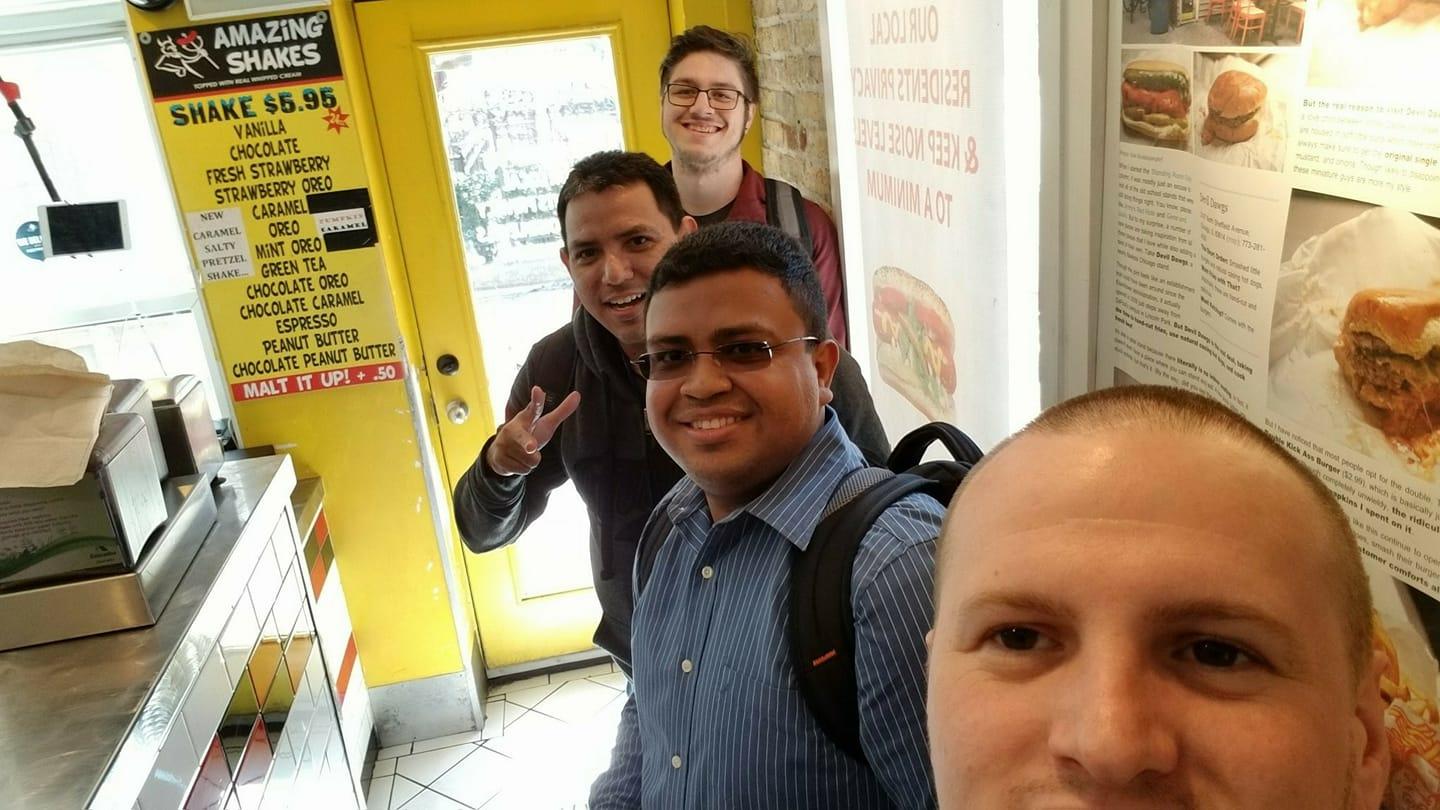 After lunch, I caught Preston So's Decoupled Drupal across the stack session. It was interesting to learn the reasoning for Acquia Cloud to roll out a Node.js offering, and why a decoupled Drupal application may want a Node.js server sitting between itself and the front end framework. I also found out that's why they call it isomorphic JavaScript - it can run in the browser and the server. I had also never checked out Acquia's Reservoir distribution. It's a rad concept of a "backend for your frontend" only distribution for Drupal.

Saturday we headed back into Chicago from Kenosha, with much lighter traffic. Before lunch, I gave my Reporting in Drupal Commerce session. It is great to have Drupal Commerce in a stable environment that we can begin to tackle these hard problems which may clinch whether an agency's client chooses our platform or not.

After lunch, I made sure to catch Jeff Geerling's Jenkins or: How I learned to stop worrying and love automation. Jeff's open source work has taught me just about everything I know when it comes to Ansible and workflow automation. I always try to catch his talks when I can.

Sprints! There was a good turn out for the sprints. There was a first-time sprinter workshop hosted by Rick Manelius of DRUD Technology helping onboard individuals with local environments. Sprinters were educated on the issue queue and how to write patches. Someone even submitted their first Drupal core patch, congrats ddavidd!

I worked on my set of issue queue items. Lisa worked on some Drupal core and Drupal Commerce issues. I was able to see first hand a bug and launch blocker for a local agency and work on the open issue for it. In exchange, they helped push through some support requests and quick patches. Thanks, Kyle! I was also able to help with some general questions from Jack Franks, who was jamming on Commerce License. He worked on a patch to allow licenses to expire properly and plans to contribute to the free trial issue for Commerce Recurring.

I am already looking forward to MidCamp 2019! And, no, it's not just because it's during St. Patrick's Day and the Chicago River will be green. There are a lot of agencies in Chicago that work with Drupal. And there are quite a few who work with Drupal Commerce or eCommerce in general. I would love to see more Drupal Commerce at this event. Being a co-maintainer of Drupal Commerce and having so many agencies who use it in the same region, with an awesome camp, why not!

We have a great regional conference with MidCamp. After five years it keeps going strong. I cannot wait to keep attending each year.