This past weekend was at Florida Drupal Camp, and I gave a talk about using PHPStan to tighten up your Drupal codebase. For the past two years, the Drupal community has been leveraging PHPStan indirectly through drupal-check and Upgrade Status to find usages of deprecated code as we journeyed from Drupal 8 to Drupal 9. This is barely the tip of the iceberg of what value PHPStan provides, but it had an immense impact.

You can download the slides as a PDF. The session was also recorded and will be available on the camp's YouTube channel later.

I wanted to write a blog to touch on items not covered in the slides but as speaker notes and audio from the recording.

Catch me (virtually) at SFDUG in March

I'll be presenting this same talk virtually at the San Fransisco Drupal Users Group meetup on March 10th. I will be updating my slides based on feedback and discussions from my talk at FLDC.

****This is a virtual event. Be sure to RSVP to the ev
https://www.meetup.com/SFDUG-San-Francisco-Drupal-Users-group/events/282897728/ 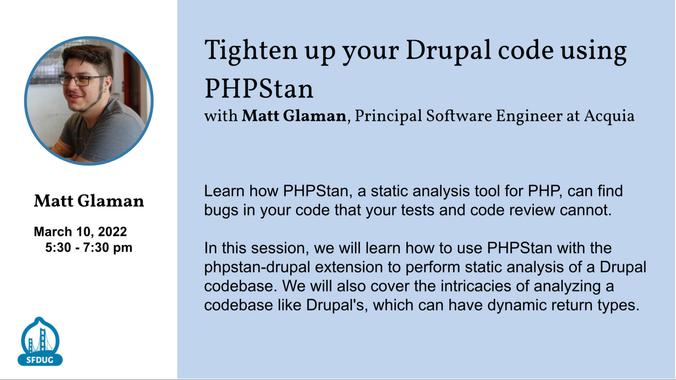 A quick history lesson on drupal-check

Part of this is my fault. The phpstan/extension-installer package did not exist. Setting up PHPStan + phpstan-drupal wasn't difficult, but you had to make sure to include the extension configuration files in your phpstan.neon for phpstan-drupal and phpstan-deprecation-rules. Something like this:

It's not the end of the world. But it leaves room for mistakes. Dries suggested we provide something more straightforward for the end-users, hence the birth of drupal-check and its demo during the DrupalCon Seattle Driesnote.

The benefits of PHPStan

Two main takeaways could be taken away from my session, I believe:

Start using PHPStan as part of your development flow. It needs to be part of your continuous integration process. It needs to run at least at level 5. I'm not going to explain in depth what rules 1-5 provide. You can see that in the documentation for PHPStan: https://phpstan.org/user-guide/rule-levels.

It will provide peace of mind for your team leads doing code reviews. It reduces the cognitive load of checking for minor details. I mean, your PHPUnit tests should catch that anyways. Right? Because you do have PHPUnit tests. Right? It also provides an emotional disconnect from team leads requesting changes to the code. Instead of a junior having to push code, wait for a review, receive various request changes, and then get frustrated that their senior pair or team lead is "too picky," you can point to the tool.

It also solves delays in teams distributed across multiple timezones. Your pull or merge request isn't "ready" until it passes PHPStan, PHPCS, and PHPUnit. You know the code is pretty solid by that point. That allows the reviewer to focus on what matters in the code being delivered.

I have overlooked very basic bugs because of review fatigue. If you have four different pull requests in your queue, you will miss basic things. So let's automate the easy stuff.