Earlier this month, I signed up as a sponsor for Jeff Geerling on GitHub. 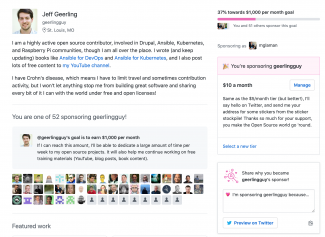 If you aren't familiar with Jeff Geerling, he's been beyond impactful in the Ansible and Drupal world. I remember the first time he showed his Dramble and I was like "wahhaat". For those who are not aware, it is was a cluster of Raspberry Pi devices. At that time, it was used to demonstrate using Ansible to provision a LAMP stack across multiple servers, today it's using Kubernetes.

The first time I remember using Jeff's work was when I set up a local development environment at a previous company. We used Aegir in production to power our Drupal site-building hosting platform (think Wix, 1&1.com, but for schools.) But, we did not have a fully standardized local development environment. I had built a Vagrant setup using Puppet. But Puppet was (is?) hard (compared to Ansible.)

One of the maintainers of the Aegir project, ergonlogic, at the time, was working on a project called Valkryie., which is how I learned about Ansible and then Jeff's work. It used Ansible to provision a local Aegir environment and made heavy usage of the infamous geerlingguy.* roles. We didn't use Valkyrie, but I learned from it and rebuilt our local development environment.

We were able to have a replication of production and execute multibranch development locally. It allowed not only us developers, but the system administrators to test and run tools they developed to help automate releases and other integrations. 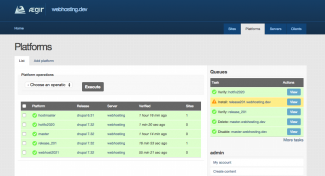 That software as a service product was built on top of Panopoly. I contributed often to Panopoly and went to Milwaukee for plenty of meetups and sprints, hosted by David Snopek one of the maintainers of Panopoly. We even used Ansible to build a virtual machine image that could be used to create a Vagrant or regular VirtualBox appliance for sprinting https://github.com/panopoly/panopoly-sprint-kit!

While that project is gone, I created a somewhat similar version as my local development environment https://github.com/mglaman/drupal-contrib-vm. This was about a year after DrupalVM was created.

Once I was at Commerce Guys (now Centarro), I then developed a Vagrant environment for interacting with Platform.sh to make local development a little bit easier https://github.com/mglaman/platformsh-vagrant.

I used Ansible as the way my site was deployed and managed as well until I moved over to Ansible. Same with ContribKanban when it was self-hosted.

Shoot, I even used it recently for setting up a Jenkins server to run through some deprecations reporting before we have the infrastructre on Drupal.org https://github.com/mglaman/deprecation_bot

This is why I am sponsoring Jeff's work. Over the past six years his Ansible work has helped me solve so many problems over the course of my career that I wish I would have done this sooner.

So, thank you Jeff, for always creating and always contributing to the Ansible community. Your work has made impact upon impact for folks.