A proper introduction to Drupal Check

You may have heard of Drupal Check. You may wonder what in the world it is or how it even came to be. I realized this went from an internal research and development task for a product, to open source contribution and then to an essential tool in the march toward Drupal 9. The timeline from January to DrupalCon in April has been pretty crazy, and I realized I have never done a proper blog post about Drupal Check.

In January I wrote a blog post about the PHPStan Drupal extension for writing better Drupal code with static code analysis. That quickly exploded and turned into a way to detect code deprecations on the journey to Drupal 9. Then that also took off. The problem was setting up PHPStan and making it more automated and repeatable.

The result of this dive into PHPStan and Drupal?

That is a lot that happened in just a few months.

How did this all get started?

Well, if you missed the news, Commerce Guys have rebranded as Centarro. At DrupalCon Seattle we unveiled Centarro Toolbox, a collection of SaaS products and support packages that help Drupal Commerce teams build with confidence. One of the products in our Centarro Toolbox is the Quality Monitor.

Quality Monitor performs proactive analysis on your codebase to detect problems in development before you deploy to production. It notifies you of necessary code updates and inappropriate API usage.

Drupal Check is, essentially, an open source version of Quality Monitor without our defined static analysis rules. I think this is awesome. We are an open source company. We are a team of seven. During the Driesnote, I realized four of us are in the Top 50 Contributors list. That's huge.

I love that our company's evolution is having an even more significant impact in open source than we expected.

Want to learn more about Centarro Toolbox? Check it out: https://www.centarro.io/products/centarro-toolbox

What does Drupal Check do?

Drupal Check is a customized runner for PHPStan. Instead of running PHPStan directly you run Drupal Check. It includes PHPStan, PHPStan's Deprecation Rules, and PHPStan Drupal and configurations for them.

Here's an example of running it against the Address module and Drupal 8.8.x with just deprecation detection: 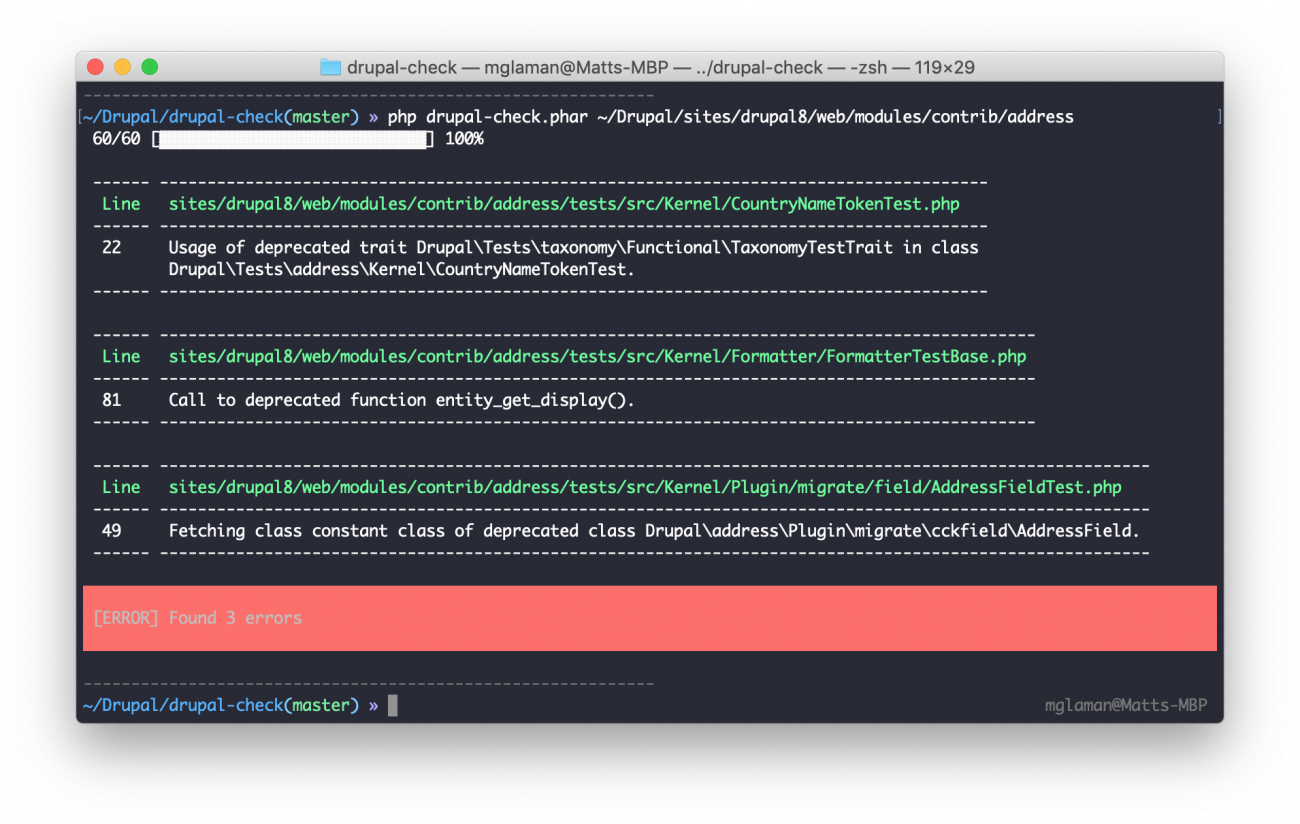 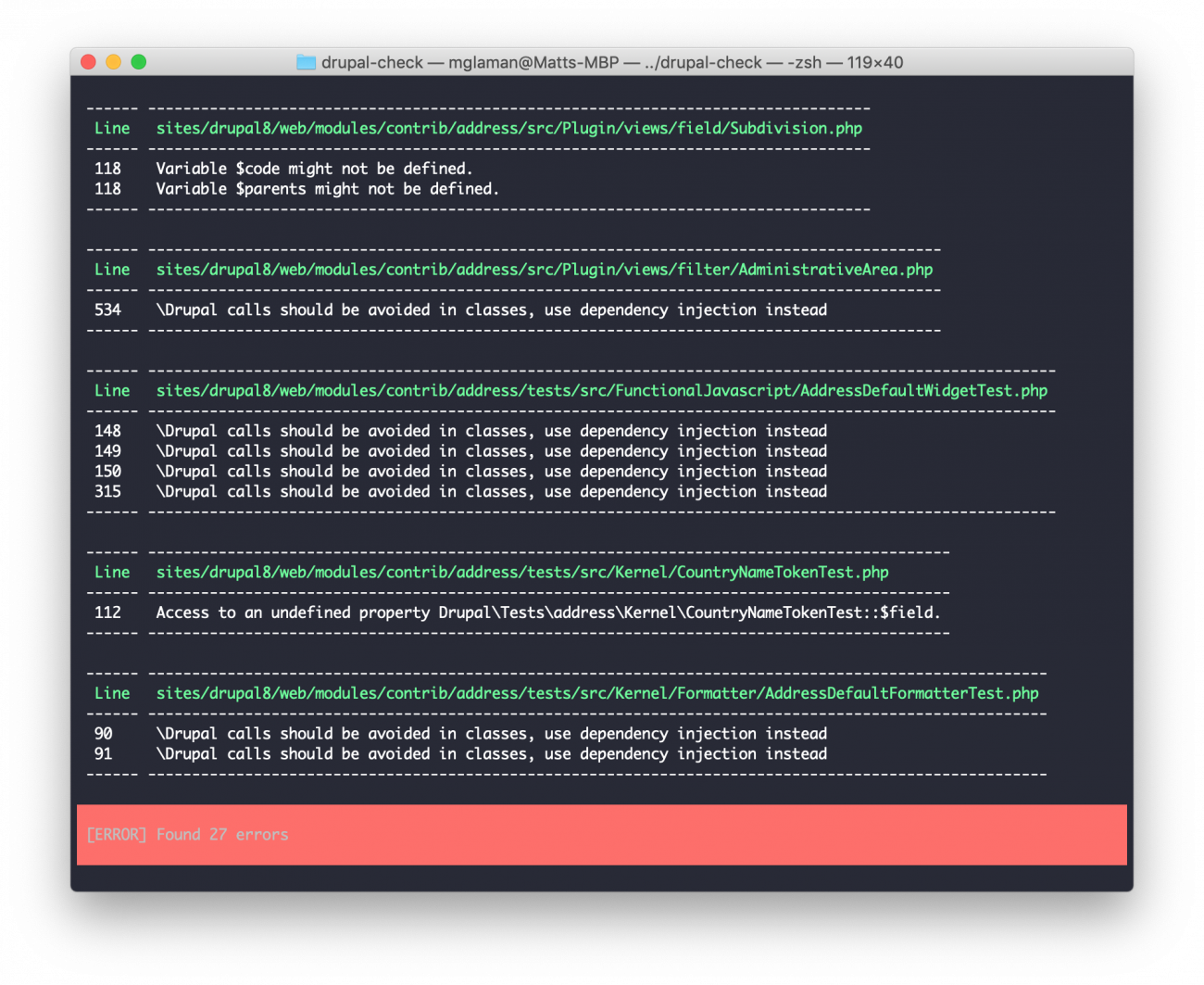 Why is this useful? Because documenting configuration is hard. It also needs to be taught and takes time at contribution events. The configuration files are available at https://github.com/mglaman/drupal-check/tree/master/phpstan

However, here's a quick overview of what is setup when running deprecation checks:

What can't Drupal Check do?

Drupal Check, via PHPStan, can bootstrap Drupal's code and inspect it for errors or deprecations, but it cannot fix code errors. At the end of April, Dezső Biczó wrote an interesting blog: Drupal 9: Automated Deprecated Code Removal - A Proof of Concept. The library announced in the blog post integrates Rector with custom code fixing definitions. It'd be interesting to add this functionality in Drupal Check.

The current features of Drupal Check are dependent on those in PHPStan. PHPStan's deprecation rules do not output the deprecation messages; it only identifies something that is deprecated. Better display of deprecation messages is an open feature request which I have been actively working on. Descriptions for deprecations are now available but do not support multiple line descriptions. If you're interested in following along, development is actively happening in this phpstan/phpdoc-parser pull request: https://github.com/phpstan/phpdoc-parser/pull/26

Here are some things which are new since DrupalCon Seattle.

The next significant feature is to finalize the deprecation description features. Being able to explain why something was deprecated and how to fix it (part of the required deprecation messaging for Drupal core) is vital. Things also get deprecated that cannot be immediately corrected. For instance, things deprecated on Drupal 8.7.x cannot be fixed in contributed modules until Drupal 8.7 is no longer supported, technically.

I would also like to fix some PHPStan issues. There is an "Easy fixes" milestone on the PHPStan project: https://github.com/phpstan/phpstan/milestone/8