I have some exciting news to share for phpstan-drupal! With the 0.12.15 release, the ability to detect and report usages of deprecated services should have full coverage! Previously, phpstan-drupal only detected if you used a method on a deprecated service. And that happened to be if the service was fetched from an object implementing ContainerInterface. That meant calls to \Drupal::service were left uncovered – even though it calls self::getContainer->get() (I thought it would "just work," but it did not.)

Palantir.net renewed for more sponsored live development streams, this time with a focus on the Upgrade Status module (and in turn the phpstan-drupal project.) This has made a huge impact in just a few streams in the capabilities of phpstan-drupal.

What does all of that mean? Here is a code example taken from the phpstan-drupal test fixtures to explain. I've added inline code comments, but I'll go into detail afterward.

PHPStan has a concept of dynamic return type extensions. Return type extensions allow you to help PHPStan under what kind of object to return. When it comes to services in the service container, it could be anything. The ContainerDynamicReturnTypeExtension in phpstan-drupal utilized a service mapping to return the correct class when fetching a service from the container. Unfortunately, it did not work with \Drupal::service. It also didn't report errors that the service was deprecated. It only reported a deprecation if that service had a method called. That means the constructor may have injected deprecated services without warning.

If PHPStan cannot determine the return type like mixed, then no analysis can take place to find deprecated usages. Guess what \Drupal::service has as its return type? It has @return mixed for its return type in its document comment block.

Oh, and figuring out how to know if the service was deprecated or not.

That led to the following two issues and their fixes:

Dynamic return type extension for \Drupal::service · Issue #190 · mglaman/phpstan-drupal
We have a dynamic return type extension for the service container, but only on the ContainerInterface. It might not be reading that \Drupal::service calls \Drupal::getContainer()->get. Resolves ...
https://github.com/mglaman/phpstan-drupal/issues/190 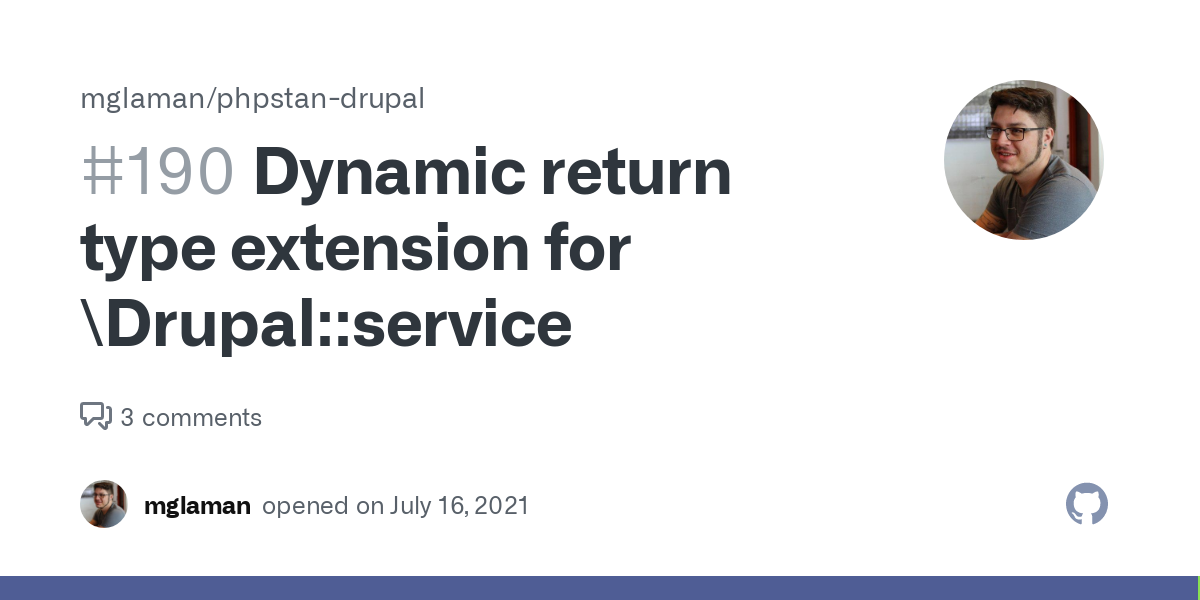 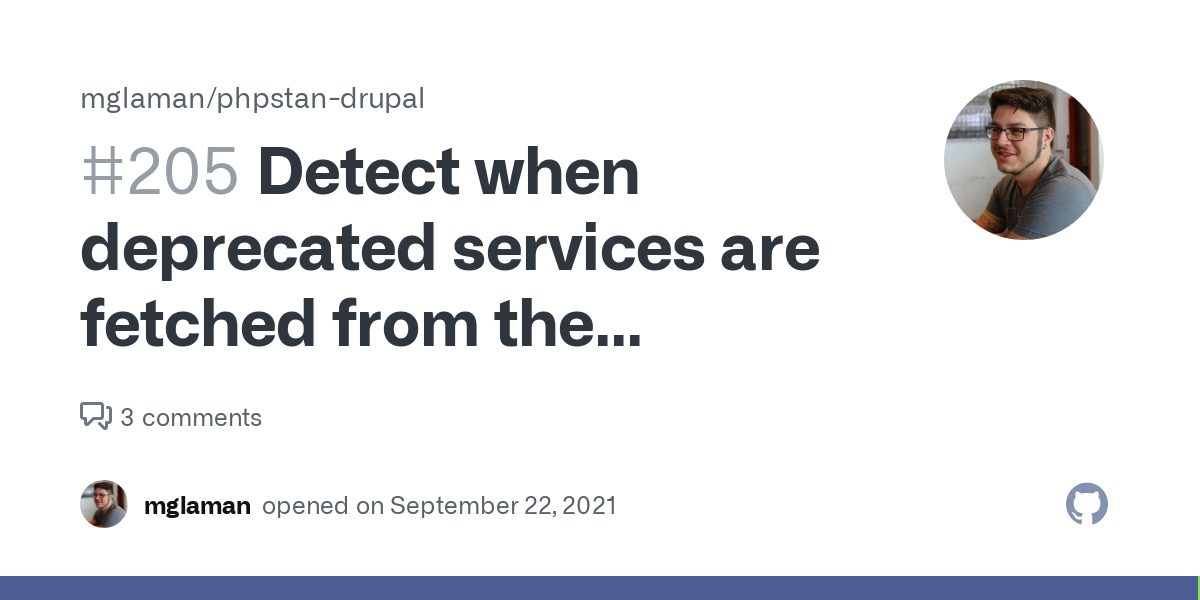 Detect when deprecated services are fetched from the container

One of the first items I worked to fix was catching calls to the container for a deprecated service when constructing an object. This can happen when a class has ContainerInjectionInterface, ContainerFactoryPluginInterface, or any of the other "I want to get the container injected and construct myself" interfaces in Drupal.

Here is an example of a controller injecting the deprecated entity.manager service

And an example of a block injecting the entity.manager service.

Previously these were skipped over when PHPStan analyzed Drupal code. That's because a rule didn't exist to inspect the parameters and check if the value provided was a deprecated service.

In phpstan-drupal, I needed to update our service mapping to respect the deprecated flags allowed in Symfony's dependency injection. Once this was added, I was able to write the GetDeprecatedServiceRule rule which checked the argument passed to ContainerInterface::get, look up the service, and report an error if it was marked as deprecated!

Here's the recording from the live stream where I resolved this issue.

Creating a dynamic return type extension for \Drupal::service helped fix the following issues in the Upgrade Status module and would have probably saved a lot of folks from various curse words during their Drupal 9 upgrades. (Sorry to those folks that I didn't catch or fix this sooner.)

I then made a matching StaticServiceDeprecatedServiceRule to check if the service name passed to \Drupal::service was deprecated.

All of my development streams are live on my Twitch channel and recordings are exported to my YouTube channel.