JSON:API Resources is now Drupal 9.0 and 9.1 compatible with the 8.x-1.0-beta4 release! If you are not familiar with this module, it is essentially the sandbox contributed project for building the extensibility layer for Drupal's JSON:API implementation. That is a fancy way of saying it lets you define custom endpoints that leverage the JSON:API specification.

We shipped the module with a requirement of drupal/core:^[email protected] as we required some code that would ship in Drupal 8.8.0. Howevever, we never released the fix for the composer.json file to allow installation of th module with Drupal 9!

I made a commit nine months ago fixing it. But I never got around to making a release 😬. 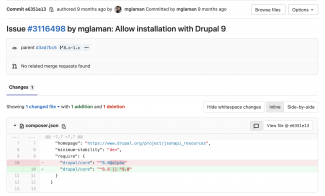 This is a pretty big deal because it unblocks most of (the entire?) JSON:API contrib ecosystem for Drupal 9 support. You couldn't use JSON:API Search API, JSON:API Views, and more on Drupal 9.

I also tagged a new release of JSON:API User Resources (8.x-1.0-alpha4.) This included a fix to the module to make it Drupal 9 compatible. This module supports user registration and password resets over JSON:API.

The JSON:API Search API needs some updates in the tests – https://www.drupal.org/pift-ci-job/1921557. But it should be fine on Drupal 9, as the failures are related to test specific items.