There is a lot happening in the world. I am not talking about COVID-19, which is still a pandemic and hasn't magically become mild. But, I am talking about the civil unrest in the United States. Some are frightened, some are angry in solidarity, some are angry and do not agree. I am hopeful. I firmly believe we have a problem in the United States with our militarized police forces. We have a problem with the "police unions" that are more synonymous to the NRA as a lobbying group than a labor rights organization.

Two events happened before I turned eighteen that made me question the good will of authority and boldened my belief that change comes through direct action, not the ballot box. 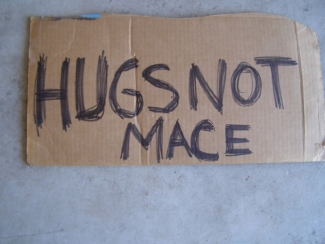 In 2004, when I was a sophomore in high school, Michael E. Bell was murdered by the Kenosha Police Department in front of his home.

On November 9, 2004, four officers were involved in shooting Bell in the head at his home in front of his mother and sister after a traffic stop of unknown reason.

He was 21. I believe the reason was suspected drunk driving. They claim he resisted arrest and tried to grab an officers gun. The police did not de-escalate the situation which occurred in front of his home.

This occurred as I was beginning to dive more and more into politics.

A year later, another incident happened. We have an annual Punk Piknik in town where bands play and the folks in the scene have a great time. It's a family all-ages event. In 2005 they got permits to hold it at a local church's fairground area. The cops came, and things got pretty heated.

They pulled the drummer off of the stage and assaulted him for resisting. A fifteen-year-old girl was dragged to the ground. Another cop brought his shotgun out of his squad into the crowd (he didn't break the yellow tape indicating it would have been cocked and loaded.)

I was actually working, I couldn't get off of work. But, I still remember getting a phone call as it all went down, and was so infuriated. We tried to file reports of aggressive behavior, but only those who were victims could file reports.  We held a protest about a week later at the Civic Park right outside the courthouse on one of the main roads in town. I think we had about 50-60 people.

While organizing, we use MySpace. I remember being called a "trouble maker" by people because of the organizing, or "just some kid." A family member told my mom "at least my kid wasn't on the news." When you fight for something you believe in, to be just, those who are not aligned will always find ways to disparage you. 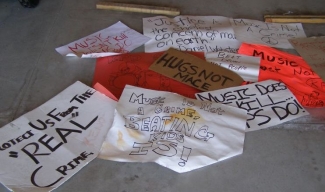 Even with rumors of "ya'll better stop, I heard the cops are coming to break this up" we had a success protest, and follow up one. We had coverage on all of the Milwaukee news stations. They also did some work to investigate our claims that witnesses of police violence could not file reports.

We were right. Thirteen local departments changed their policies as a result. Now, what kind of change did that truly make? I'm not sure. But, it felt good. I was not even old enough to vote, and I had doubts that voting made a difference. But with this we made one. At least I try to tell myself this, as I look around at the emboldened police presence we have.

Last week the Mayor of Kenosha said he was going to work with the Kenosha Police Department and community groups to improve police relationships. That is not enough. I have called about the #8cantwait policy plan. I advise you call your local government as well.

Solidarity to the protestors.

Solidary to the council people in Minneapolis looking to defund or dispand the police.