Drupal: cache tags for all, regardless your backend

Phil Karlton is quoted as having said, "There are only two hard things in Computer Science: cache invalidation and naming things." As someone who suffers horribly from the latter, I'm glad Drupal's caching APIs make the former a breeze. The long short of it is that caching of data improves performance by not having to perform the same operations multiple times after it has been done the first time until you need to re-run that operation again. It involves some storage (static variable in memory, memory backend storage, or the database.) Generally, you store the data with a given identifier for later retrieval, the actual data to be cached for later reuse, and possibly an expiration time for automatic invalidation.

Drupal's 8.0.0 release introduced cache tags to the Cache API. Previously Drupal supported using wild card cache identifiers for bulk cache invalidation. Thanks to sdboyer, catch, and everyone else who made this possible!

Cache tag support
The problem After [#81461] we are still left with a very monolithic API for clearing caches on content changes. cache_clear_all() is hard coded to the page and block caches. Node, user, taxonomy and many other modules call cache_clear_all() after any form submission - even though the entity in question may not even be shown on any of the pages or blocks that were cached. This can result in a very low cache hit rate especially on sites with lots of content getting posted.
https://www.drupal.org/project/drupal/issues/636454 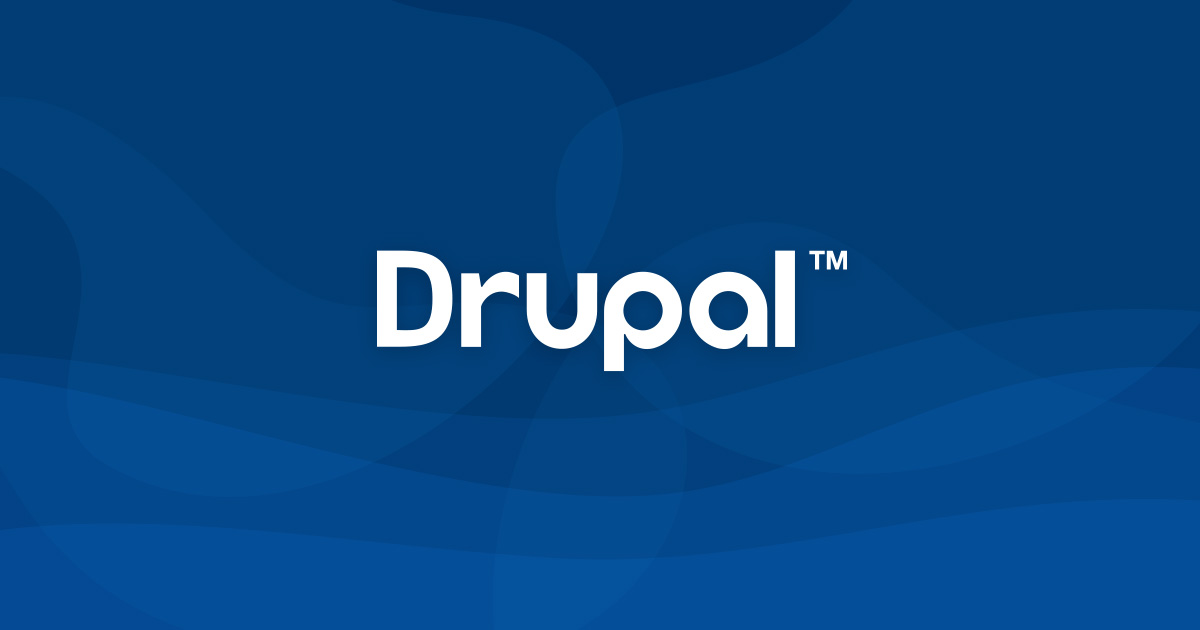 What is a cache tag?

The Drupal core issue which added cache tags explains cache tags versus identifiers. I'll give a quick example that should be generic enough to relate to Drupal or any other framework or application.

Cache objects have a unique ID that is fixed or dynamically generated, ie entity:data:{entity_type}:{entity_id}. Generally, a cached object may have specific contexts about that cache – the current user or language. That means entity:data:{entity_type}:{entity_id} could have different variants based on contexts. We can still tell the cache to delete that specific cache object if we know the type and ID of the entity data we want to invalidate. But, what if we wanted to delete all cache objects for that entity type? We could query the entity table for the IDs of all entities of that type, but that would be a huge performance hit. Instead, we could use cache tags to describe are cache objects.

How are cache tags supported?

Cache tags are supported by various cache storage backends. In-memory cache storages like Redis support cache tags natively. Memcache does not, but there is there are forks which do or via emulation in the application layer. Your SQL database isn't one of them but Drupal supports cache tags via emulation.

Cache tags are also generally supported by reverse proxies and CDNs for granular cache invalidation. Having cache tags used by your system enables you to properly invalidate your HTTP cache as well.

What about PSR-6/PSR-16 caching standards?

A PSR-6 compliant cache library could support cache tags, but a PSR-16 compliant cache library cannot. Drupal is not compliant with either standard recommendations, but that isn't much of a concern. These PSR's are for interoperability with libraries and general use frameworks. Drupal's caching library is not a shared component for other libraries to consume. But I really wish it was! (See the end of this blog post.)

How does Drupal emulate cache tags?

It's pretty simple. The \Drupal\Core\Cache\DatabaseBackend cache backend class defines an SQL schema which stores the tags as a space separated string in a tags column in the database table. For MySQL/MariaDB/Percona it is a LONGTEXT field type and PostgreSQL and SQLite is a TEXT field type. There is another table which tracks the number of times a specific cache tag has been invalidated. Here are the top ten invalidated cache tags on my site:

Drupal has this checksum logic in the \Drupal\Core\Cache\CacheTagsChecksumTrait trait. The checksum is a sum of the current invalidations across each cache tag. This is written with the cache object. Here are cache are some cache objects for entities on my site:

If a cache tag is invalidated in the future, the checksum will be different. Currently entity_field_info has 524 invalidations. If I were to invalidate it again, the count would bump to 525. The checksum for my existing cache objects would not match (524 !== 525) and be considered invalid. The checksum is compared once the cache object has been loaded from the database.

The following is taken from \Drupal\Core\Cache\DatabaseBackend::prepareItem, which is used to process cache objects retrieved from database cache.

The cache tag invalidation and checksum generation supports delayed delayed operations to prevent a stampede effect when there are multiple invalidation calls during a single database transaction.

This checksum process is part of the Cache API. Any cache backend may implement \Drupal\Core\Cache\CacheTagsChecksumInterface to use checksums as a means for checking tag invalidations.

A practical example in Drupal

Let's use a typical Drupal example. Drupal provides full caching of responses, meaning once a render is completed that computed HTML can be served from cache for subsequent requests. A page in Drupal is made up of blocks placed in different regions of the page including the main content of the page.

The cached page would have a cache object ID similar to render:page:{path}. Maybe it has a cache tag of rendered, so that all rendered cache objects may be invalidated at once. But, what about all of those blocks and the main content? What if they change? Then the rendered page cache would be stale. The solution is to capture all related cache tags and add them to the main render cache object.

In Drupal we call this cache metadata and we have mechanisms to bubble this data throughout the response lifecycle. This rendered page cache objects could have the following cache tags:

This allows invalidating only relevant page caches when a dependent object has been modified and its caches invalidated. The benefit is that if node:34 is ever modified, only the page caches with that dependency are invalidated! If block:1 happened to be the header block on all pages, modifying it ensures all page caches get invalidated.

These invalidations can then be tracked and used to purge caches on your reverse proxy or CDN, as those caches should have the same cache tags tracked by Drupal.

This isn't a dunk on Laravel. It's just that I had a "woah wait what" moment when using Laravel's caching capabilities after using features that have existed in Drupal since Drupal 8.0.0, and I have come greatly accustomed to it. This blog post is one of several I may post highlighting out-of-the-box capabilities of Drupal's caching layers or other fun things.

Recently Klausi made a meme tweet following a viral format talking up what makes Drupal the best CMS. For example our entity field system, access control, and views. 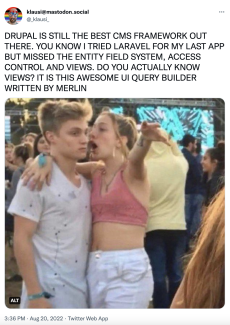 Klausi guessed right. It turned out to be a meta tweet at my subconscious. Previously I had to work on a Laravel app and add caching of geolocation data and got completely frustrated when trying to handle cache invalidations.